Charles Henderson got off to a strong start in the 9th annual Terry Sikes Memorial Tournament Thursday with wins over Paul W. Bryant and Tuscaloosa County.

In game 1, the Trojans used a five run second inning to secure an 11-1 victory over Bryant. Harrison Reeves got the start and win on the mound. He went all five innings and struck out five. Every starter for the Trojans either scored a run or drove in a run. Dalton Harris was 2-2 with two doubles and three RBI. Michael Fox added a single and two RBI.

In game 2, CHHS roared out of the gates with a nine run first inning to cruise to a 12-0 victory. Nathan Barron was credited with the shut-out victory on the mound working all five innings and striking out three. The Trojans sent thirteen batters to the plate in the first with hits by Mitch McLeod, Quay Lawson, Harris, Chance Shaver, and Barron.

CHHS will be back in action Friday against Northridge at Frazier Field beginning at 6:00 p.m.

In other opening day action in the Sikes Tournament, Tuscaloosa County topped Eufaula and Northview beat Butler County Magnet. Games resume Friday at 11:00 am at Riddle-Pace Field on the campus of Troy University.
Posted by CHHS Baseball at 11:08 PM No comments:

Charles Henderson improved to 4-2 on the young season with an 11-0 win over Andalusia Tuesday night. The Trojans erupted for nine runs in the second inning, all with two outs to jump out to an early lead. Blake Hutchinson was credited with the win for the Trojans after working three innings. Quay Lawson finished 3-4 and was only a home run away from the cycle with four RBI. Chance Shaver was 2-3 with two doubles, two RBI and a run.

The Trojans are back in action at Frazier Field Thursday night against Paul W. Bryant and Tuscaloosa County on the opening day of the Terry Sikes Memorial Tournament. The first game will begin at 4:30.
Posted by CHHS Baseball at 9:44 PM No comments:

For the second time in a week, the Trojans took to the road for a double header against a 6A opponent and came out with a split. The Trojans fell in game one 12-6 versus the Cougars of Northview before winning game two 5-3.

In the opener, Mitch McLeod started on the mound for the Trojans and took the loss after 4 1/3 innings of work. Senior Nathan Barron finished 3-4 with a double and run scored while Quay Lawson added two singles and two runs scored.

Barron (2-0) took the mound in game two and turned in a tremendous performance. He went all seven innings and allowed only two earned runs on four hits while striking out ten. The big inning for CHHS came in the first, when the first four batters of the game, K.D. Edenfield, Chance Shaver, Barron, and McLeod, all came around to score as the Trojans batted around. McLeod finished with a double, RBI, and two runs while Sophomore Jalin Lawson was 2-3 with a stolen base.

The Trojans return home to Frazier Field to take on Andalusia Tuesday night at 6:30.
Posted by CHHS Baseball at 9:41 PM No comments:

Charles Henderson improved to 2-1 with a 4-3 victory over Luverne Thursday night at Frazier Field. Mitch McLeod's leadoff double in the second inning led to his steal of home later in the inning which accounted for the Trojans' first run. Dalton Harris singled in courtesy runner Gregory Barnett later in the inning. The Trojans added single runs in the third with a Nathan Barron solo home run and the fourth from a leadoff triple off the bat of Quay Lawson and a single by Chase Connell. Connell and Harris both finished 2-3 with an RBI.

Sophomore Michael Fox got his first career win and struck out four. Mitch McLeod pitched the final 1 2/3 innings and was credited with the save.

The Trojans will be back in action Saturday at Northview. The double header will begin at Noon.
Posted by CHHS Baseball at 8:40 PM No comments:

The scheduled doubleheader against Luverne on Thursday February 18 will now be a single game beginning at 4:30.
Posted by CHHS Baseball at 12:56 PM No comments:

The Charles Henderson baseball team won the first game of the 2010 season 6-2 against Dothan High School before falling to the Tigers 7-4 in the second game. In the opener, Nathan Barron picked up the win going four innings and striking out four without allowing an earned run. Blake Hutchinson finished the game on the mound going three innings and striking out three to get the save. Offensively Senior Mitch McLeod was 3-4 with two RBI and a run scored. Quay Lawson hit his first career home run in the top of the first and finished with two runs and an RBI. Junior Harrison Reeves and Sophomores Michael Fox and Jalin Lawson each had two hits.

In the nightcap Reeves got the start and pitched four strong innings despite receiving a no decision. At the plate Barron hit his first career home run in the top of the first inning and fellow Senior Chance Shaver finished 2-4 with a double. Chase Connell finished the game 2-2 and Fox added a triple.

The Trojans will play their home opener Thursday at Frazier Field against Luverne. The doubleheader will begin at 4:30.
Posted by CHHS Baseball at 8:05 AM No comments:

The 2010 season will be delayed one day for the Charles Henderson Trojans as the scheduled season opening games against Prattville and Dothan were cancelled Monday due to rain. The Trojans will open the season on Tuesday February 16 in a doubleheader against Dothan High School in Dothan beginning at 4:00.
Posted by CHHS Baseball at 5:36 PM No comments:

K.D. Edenfield, a senior outfielder and AHSAA North-South All-Star participant, has committed to play football for Troy University following his graduation from Charles Henderson. Click the headline above to read more.
Posted by CHHS Baseball at 3:32 PM No comments: 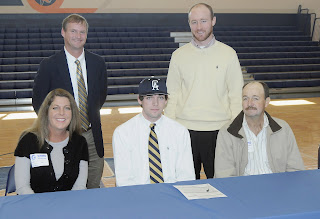 
Mitch McLeod signed a baseball scholarship to play for Central Alabama Community College on Wednesday February 3 in a ceremony at Wagoner Hall on the campus of CHHS. McLeod is a pitcher and outfielder for the Trojans. He has spent three years with the varsity team and had an 8-3 record on the mound in the 2009 season. Mitch also batted .343 for the season while striking out only 4 times in 108 at-bats.
Posted by CHHS Baseball at 10:27 AM No comments: